Live Boston reports that with both bodies and vehicle recovered from the water off Black Falcon Pier, investigators are now trying to determine why and when they went into Boston Harbor.

At this time it is believed that the two people are Tatianna Morales, a young mother of two and the registered owner of the white Ford Escape along with her friend Djovany Pierre, aka Vanny Barrz, the man whom she was last seen with on August 11th in Roxbury.

Morales was from New Bedford.

“The recovery of the vehicle and the victims, both deceased, was a development in a still ongoing investigation,” State Police reported.

From the poster that Morales’s family began circulating several days ago: 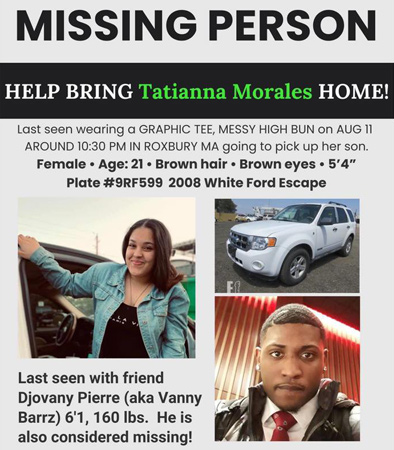 Rescue teams from Boston Police, Boston Fire, Massport and State Police began arriving at the pier around 12:45 p.m. on Friday to look for the vehicle and the two people believed in it. Both bodies have since been recovered, along with the SUV – which may have gone into the water several days ago.