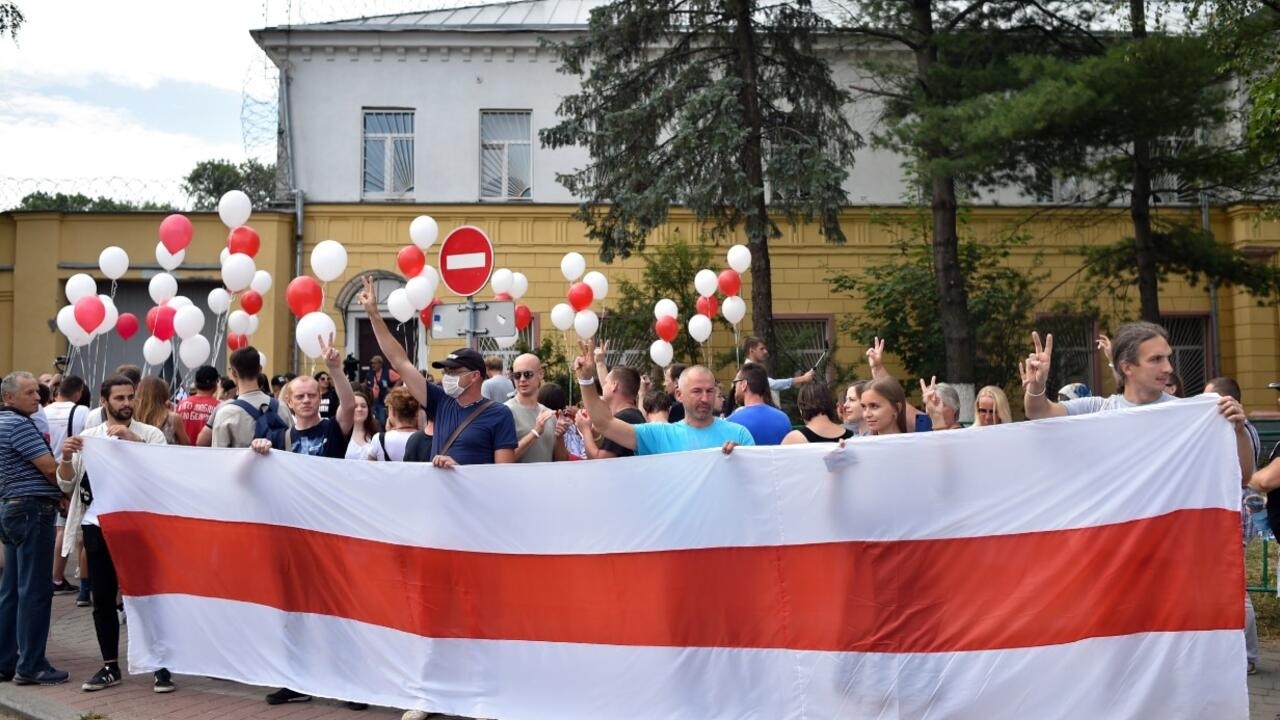 Protesters rallied outside a prison in Minsk on Tuesday where the husband of Belarus’s main opposition figure was being held, as she denounced a “rotting system” during a 10th day of demonstrations over a disputed election.

Several hundred people gathered outside the walls of the detention centre to mark the 42nd birthday of Sergei Tikhanovsky, a popular blogger who was imprisoned alongside other rivals of President Alexander Lukashenko ahead of the August 9 election.

The 65-year-old strongman is under pressure to step down after days of protests and strikes over his claim to have won a sixth term in the vote and a brutal police crackdown on post-election protests.

Lukashenko was jeered by workers at a state-run factory on Monday but has defied calls to hold a new election and on Tuesday handed out awards to 300 members of the security services, who have been accused of abusing arrested protesters.

At the detention centre where Tikhanovsky is being held, protesters holding red-and-white balloons in the colours of the opposition clapped and chanted “Happy Birthday”.

Tikhanovsky’s wife, Svetlana Tikhanovskaya, was allowed to run in his place but fled to neighbouring Lithuania after claiming that Lukashenko had rigged the election to secure his official 80 percent of the vote.

Belarusian investigators have accused Tikhanovsky of inciting “social hostility” and calls to use violence against law enforcement officers.

In a video message, Tikhanovskaya said her husband was spending his birthday in prison accused of “a crime he did not commit”.

“All of this blatant lawlessness and injustice shows how this rotting system works, in which one person controls everything, one person who has kept the country in fear for 26 years, one person who robbed Belarusians of their choice,” she said.

Belarus saw its largest street demonstrations over the weekend since it gained independence from the Soviet Union, with more than 100,000 people taking to the streets of the capital to demand Lukashenko stand down after 26 years in power.

Authorities have gradually released detainees — many emerging with horrific accounts of beatings and torture.

European Union leaders have announced they will hold an emergency video summit on Belarus on Wednesday and both the United States and Britain this week voiced concerns over the elections and the crackdown.

Authorities must “enter into a national dialogue with the opposition and society to overcome the crisis,” Merkel said, according to a spokesperson.

Russia and Belarus have very close ties and Lukashenko has reached out to Putin for assistance in the crisis.

The Kremlin has said it is ready to step in if necessary through the CSTO military alliance between six ex-Soviet states.

But it is unclear how much support Putin is willing to give to Lukashenko, who in recent years has often played off Moscow against the West.

Tikhanovskaya, 37, has demanded the authorities release all detainees, remove security forces from the streets and open criminal cases against those who ordered the crackdown.

She has said she will organise new elections if Lukashenko steps down and the opposition has formed a Coordination Council to ensure a transfer of power, which is due to convene on Tuesday.

Tikhanovskaya’s ally Maria Kolesnikova on Tuesday visited the National Academy Theatre in Minsk to show support for staff who resigned after director and former culture minister Pavel Latushko was forced from his post for publically calling for new elections and Lukashenko’s resignation.

The Komsomolskaya Pravda newspaper announced it was unable to print its Tuesday edition focusing on historic protests over the weekend and said it had secured another printer that would produce its print edition a day late.