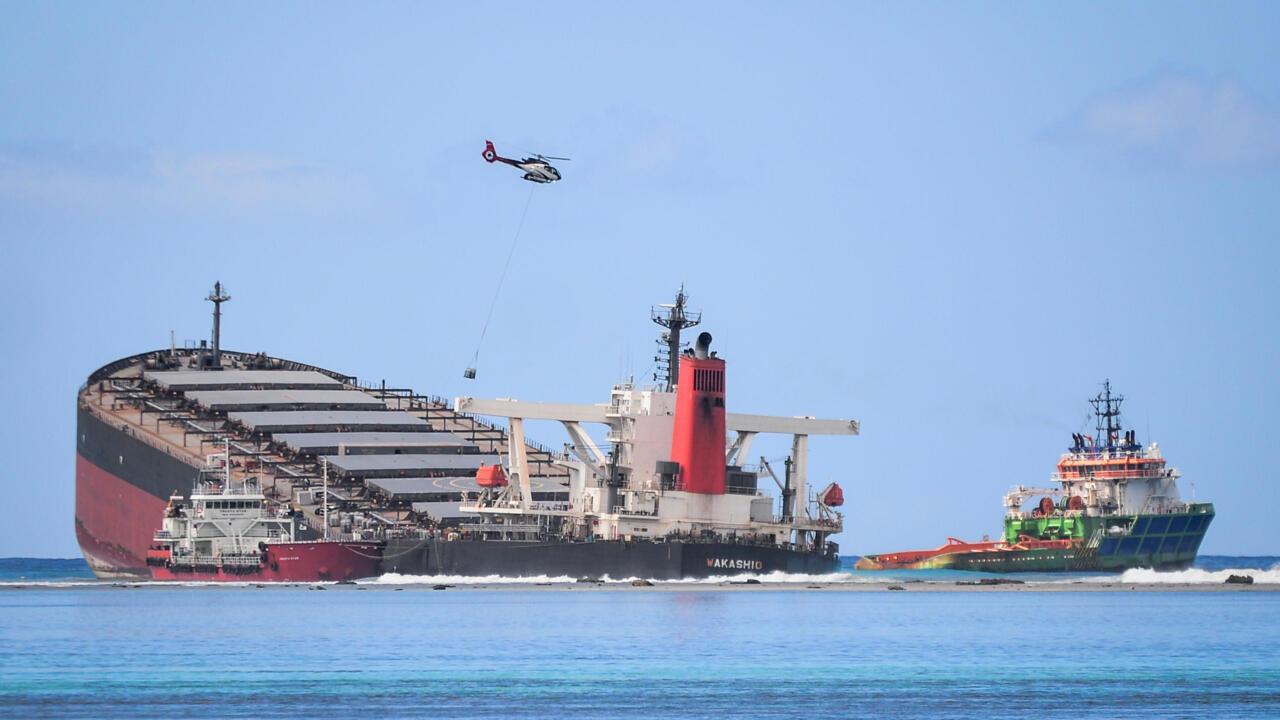 The MV Wakashio ran aground on a coral reef on July 25 and began oozing oil more than a week later, spilling more than 1,000 tonnes into blue waters popular among honeymooners and tourists.

Officials have yet to reveal why the ship, which was making its way from Singapore to Brazil, had come so close to the island, which is now reeling from ecological disaster.

“We arrested the captain and his second-in command today. They were taken to court on a provisionary charge. The investigation continues from tomorrow with the interrogation of other crew members,” said spokesman Inspector Shiva Coothen.

The captain, an Indian citizen, and his deputy, who is Sri Lankan, were charged under the piracy and maritime violence act and will reappear in court on August 25.

Salvage crews managed to pump some 3,000 tonnes of fuel off the bulk carrier before it split in two on Sunday, preventing a much larger environmental catastrophe.

On Tuesday they began towing the larger of the two pieces of the Wakashio out into the open ocean where it is to be sunk. The part containing the engine room remains wedged on the coral reef.

“We want to take advantage of high tide to pull it little by little. This part of the boat is 225 metres long and 50 metres wide.”

He said the vessel would be tugged almost 15 kilometres (nine miles) away from the coral reef and sunk.

The decision to sink the boat was taken on Monday in consultation with French experts who have been sent to assist Mauritius.

“Since oil has been largely removed and the amount of the remaining oil is small, the impact of the operation on the environment is expected to be limited,” said an official from the Japan International Cooperation Agency, part of a team that is also helping Mauritius in the wake of the disaster.

Japan announced Monday it was sending a second team of seven experts to help clean up the spill, after sending a first team of six people.

The new team, which departs Wednesday, will bring special oil-absorbent materials donated by a Tokyo-based company.

“We want to help local people who are struggling to remove oil,” said Yuki Takenoshita of M-TechX, which developed the material made of polypropylene which can absorb 1,200 litres of oil.