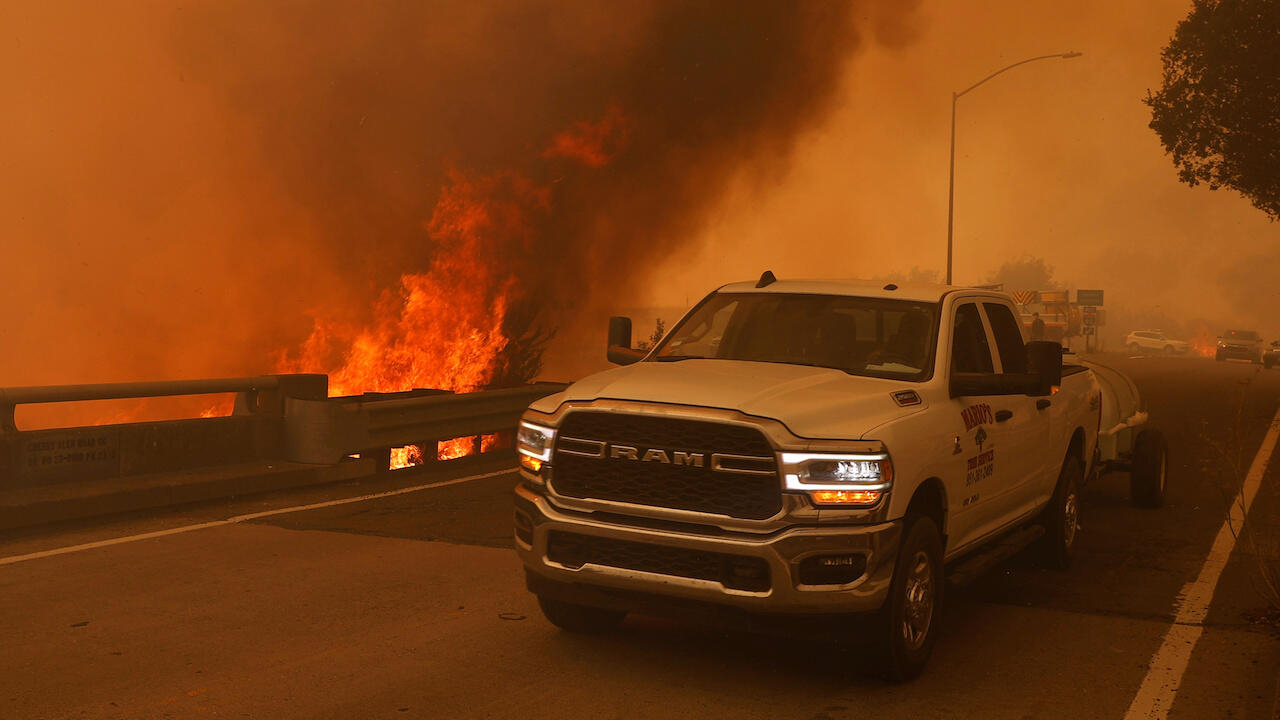 Crews worked in blistering heat Wednesday to beat back wildfires that ignited across northern California, sending thousands of people from their homes into smoky air, briefly halting traffic on an interstate and killing a pilot on a firefighting mission.

Thousands of people fled their homes in northern California on Wednesday as hundreds of fast-moving wildfires spread across the region, burning houses and leading to the death of a helicopter pilot.

In Vacaville—a city of about 100,000 people located between the state capital Sacramento and San Francisco—residents were urged to evacuate during the night as the wind-whipped flames swallowed dozens of homes.

Many were awakened by neighbors or firefighters desperately banging on their doors, and rushed out dressed only in their pajamas. Several suffered burns as they ran for their lives.

Evacuation orders or warnings were also issued in other counties—including the wine regions of Sonoma and Napa—where fires sparked by lightning are raging unchecked amid a sweltering heat wave.

Cal Fire officials said the series of fires in that region, dubbed the LNU Lightning Complex, had destroyed 50 homes, burned through nearly 50,000 acres and were zero percent contained by early Wednesday evening.

They added that a helicopter pilot taking part in the firefighting efforts in Fresno County, southeast of San Francisco, had died in a crash as he was attempting to drop water.

In Santa Cruz and San Mateo counties a series of fires called the CZU Lightning Complex forced the shutdown of portions of the iconic coastal Highway 1 as flames came close to the road.

Officials said the region’s rugged terrain and dry vegetation were making it difficult to combat the blaze.

Governor Gavin Newsom, who has declared a state of emergency to facilitate the release of emergency funds, said the wildfires had been caused by thousands of lightning strikes in recent days in the Bay Area.

Grateful for our firefighters, first responders, and everyone on the frontlines protecting Californians during this time.

He told reporters that 23 of those fires were considered major blazes.

Newsom added that fire departments in other states, including Nevada, Arizona and Texas, were sending reinforcements to help fight the wildfires that are fueled by record-breaking heat and low humidity.

Cal Fire spokesman Jeremy Rahn said that in all, the fires had so far burned more than 300,000 acres across the state.

“Firefighting resources are depleted as new fires continue to ignite,” he told a press briefing. “The size and complexity at which these incidents are burning is challenging all aspects of emergency response.”

In the past week, California’s Death Valley has been experiencing historic high temperatures, with the mercury rising as high as 130 degrees Fahrenheit (54.4 degrees Celsius).

>> Hot spot: Is Death Valley’s record temperature of 54.4C a sign of things to come?

Nearly 45 million people across the western United States were under an excessive heat warning or heat advisory Wednesday.

The scorching temperatures have put a massive strain on California’s power network, with blackouts leaving nearly 50,000 people without service, according to Poweroutage.us.

The fires have also affected air quality in the northern part of the state, where falling ash forced some residents to remain indoors.

“The air quality will be very poor for the foreseeable future given rapid spread of fires and stagnant air mass,” the National Weather Service in the Bay Area tweeted.

Wildfires have become more frequent and bigger in California in recent years, in part driven by climate change.

The deadliest fire in the state’s history—the Camp Fire—took place in northern California in November 2018 and killed 86 people.

“Wildfires are threatening the safety and livelihoods of Washingtonians all across the state,” Inslee said in a statement.

“And the COVID-19 pandemic has put additional strain on our resources, as some of our usual support is further limited due to international movement restrictions.”

Several major wildfires were also burning in the state of Colorado, where hot, dry conditions were fueling the flames.