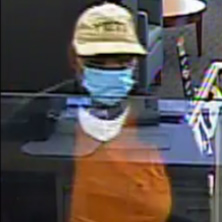 The FBI’s Violent Crimes Task Force reports it is looking for a man it says held up the Rockland Trust branch, 229 North Harvard St. at Franklin Street, on Tuesday morning.

Police say the man, described as heavyset, about 5’9″ and black, entered the bank around 9:50 a.m. and demanded money. He then fled down Franklin Street.