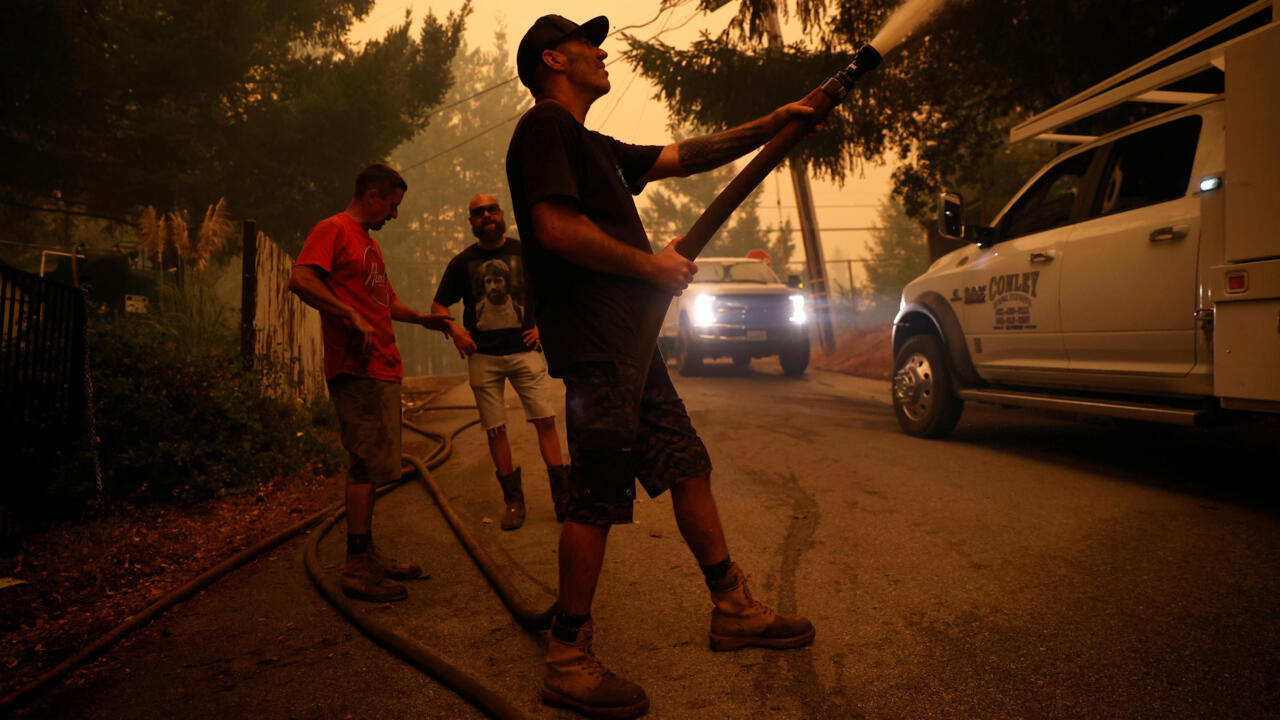 Tens of thousands of displaced Californians huddled under mass evacuation orders in the midst of a heat wave and a pandemic on Friday as lightning-sparked firestorms raged across tinder-dry landscapes in and around the greater San Francisco Bay area.

At least six people have died in the fires, the California Department of Forestry and Fire Protection (CalFire) reported Thursday night.

With firefighting forces badly depleted from the heaviest spate of incendiary lightning strikes to rake California in over a decade, some ground crews labored through grueling 72-hour shifts against the deadly onslaught, despite efforts to muster reinforcements from out of state.

“With no reserves coming, they just do what they’ve got to do,” CalFire spokesman Scott Ross said by phone, referring to firefighting teams that normally work in 24-hour shifts. “We’re stretched very thin.”

“Everything is gone,” resident Nick Pike told CapRadio in Sacramento, the state capital, after he and three neighbors lost their homes near the town of Vacaville, about 55 miles (88 km) northeast of San Francisco.

As of Thursday night, the biggest fires statewide had collectively scorched more than 630,000 acres, or 980-plus square miles, an area twice as large as the entire land mass of sprawling Los Angeles. Hundreds of homes and other buildings were left in ruins.

A utility crewman died on Wednesday while on duty helping clear electrical hazards for first-responders. Earlier that day, the pilot of a firefighting helicopter contracted by the state was killed in a crash during a water-dropping mission in Fresno County.

CalFire officials late on Thursday reported four civilian fatalities in the same fire zone, dubbed the LNU Complex, where the utility worker had perished, though no details on the circumstances of their deaths were immediately available.

Plumes of smoke and ash fouled air quality for hundreds of miles around fire zones, adding to the misery and health risks of residents forced to flee or those stuck inside sweltering homes that lacked air conditioning.

Medical experts warned that the coronavirus pandemic has considerably heightened the health hazards posed by smoky air and extreme heat, especially for older adults and those already suffering from respiratory illnesses.

Hundreds of wildfires are generating enormous amounts of smoke in California today. Here, NOAA’s experimental HRRR-Smoke model depicts how thick the smoke will be and how far it will travel from Aug. 20 – 22 in UTC time (which is 7 hours ahead of PT) #CaliforniaFires #FireWx pic.twitter.com/X0AamcKUbx

One of the greatest immediate threats was posed by a squall of fires roaring through the Santa Cruz mountains south of San Francisco, forcing some 48,000 residents to flee their dwellings and destroying at least 50 structures, CalFire said.

As the fire moved south, the University of California at Santa Cruz called for voluntary evacuations from its campus on the northern flank of that coastal city.

To the north, another group of fires raced through hills spanning several counties in northern California’s wine country, about 35 miles (56 km) southwest of Sacramento, destroying at least 480 homes and other structures, according to CalFire.

A number of wineries in the region were forced to cease operations in mid-harvest as evacuations expanded in Napa and Sonoma counties, the San Jose Mercury News reported.

Collectively known as the LNU Complex Fire, that conflagration had blackened 215,000 acres (87,000 hectares) by Thursday night, a day after residents of communities overrun by flames had to flee, four of them suffering burns.

A third batch of fires named the SCU Lightning Complex grew to about 157,000 acres on Thursday some 20 miles east of Palo Alto, with containment reported at just 5%.

The fires raged amid a record-breaking heat wave that has baked California since last Friday, resulting from a dome of atmospheric high pressure hovering over the American Southwest.

Meteorologists say that same high-pressure ridge has also been siphoning moisture from remnants of a now-dissipated tropical storm off the coast of Mexico, creating conditions ripe for thunderstorms across much of California.