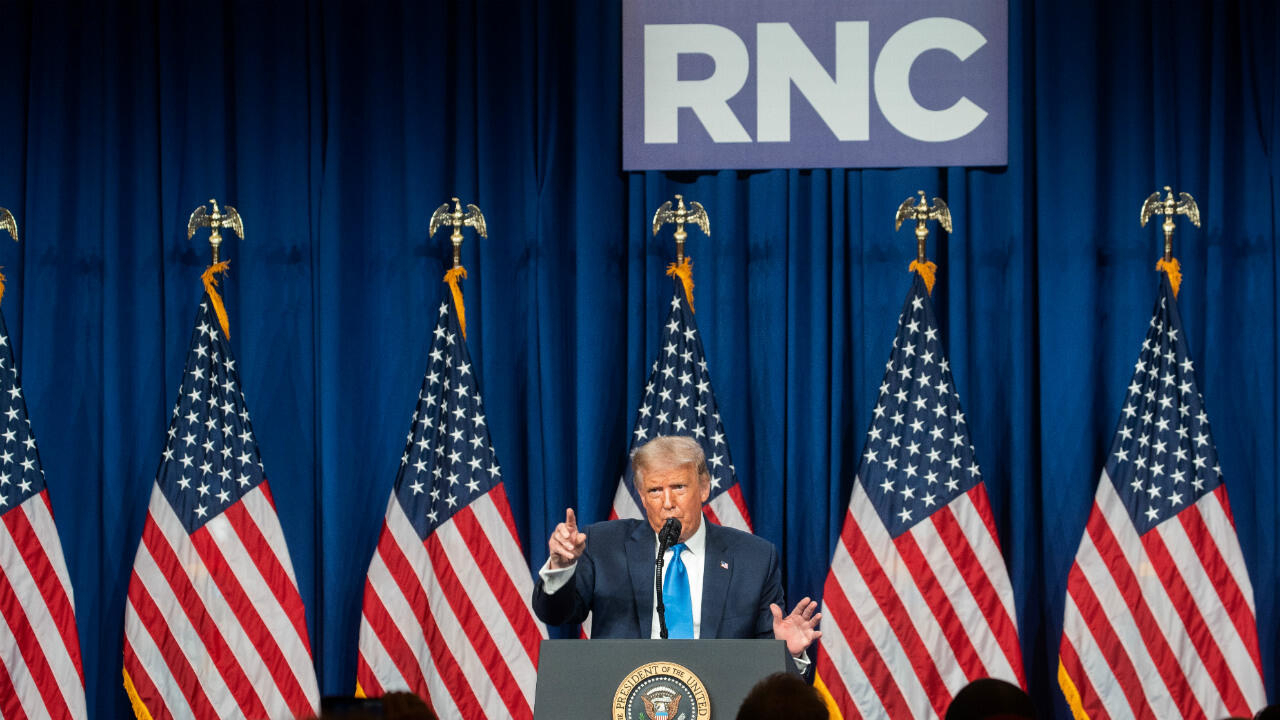 The opening of the Republican National Convention on Monday quickly generated controversy over how the four-day event is being covered by the news media, with advocates of US President Donald Trump angered over attempts to fact-check claims in real time.

Day One of the Republican National Convention featured a complaint about his coverage by President Donald Trump, some aggressive fact-checking by television reporters and an odd social media backlash against Fox News Channel, the favourite network of many of the president’s fans.

Trump gave an unexpected 54-minute address to delegates, appeared in two segments from the White House in prime time and had Donald Trump Jr. give one of the featured speeches.

“It starts by rejecting radicals who want to drag us into the dark, and embracing the man who represents a bright and beautiful future for all. It starts by re-electing Donald J. Trump president of the United States,” Trump Jr. said in his speech.

MSNBC and CNN, the ratings leaders during last week’s Democratic convention, were again the two commercial networks that covered the convention most thoroughly.

But unlike last week, they interrupted the Republicans for real-time fact-checks and analysis. In one case, MSNBC interrupted a speech from a nurse who had praised Trump’s response to Covid-19 for saving lives.

“It’s all propaganda,” said contributor Dr. Vin Gupta. “There’s no truth to it.”

MSNBC also broke into a speech by the Missouri couple who stood outside of their house with guns as a Black Lives Matter protest march went by, noting in an onscreen chyron that the duo had been charged with unlawful use of a weapon.

WATCH: A White couple pointed guns at protesters in St. Louis as a group marched toward the mayor’s home to demand her resignation. Video shows the armed couple standing outside their home Sunday evening in the upscale Central West End neighborhood of the Missouri city. pic.twitter.com/VTuQjzcJyA

“We do feel a responsibility to make sure that we are not unquestionably presenting things that are false, that are deliberately false and are potentially dangerously false,” said MSNBC host Rachel Maddow.

The decision to point out falsehoods as they arose drew the ire of Fox News Channel host Laura Ingraham, who asked why the Democratic National Convention was not similarly scrutinised.

“MSNBC is fact-checking the GOP speakers in real time,” Ingraham wrote on Twitter. “Why didn’t they do the same last week for the DNC?”

MSNBC is fact-checking the GOP speakers in real time. Why didn’t they do same last week for the DNC?

The usually Trump-friendly Fox network had its own issues during the first 90 minutes of its coverage, when viewers noticed they could see more of the actual proceedings on either CNN and MSNBC.

This despite criticisms from pro-Trump media personalities even before the convention got under way.

“The mob, the media – they won’t be showing large parts of the RNC that we’ll be showing,” Sean Hannity promised at the opening of his eponymous show.

And yet that turned out not to be true, with Fox often choosing coverage of its own TV personalities over that of the actual convention. Hannity himself talked over a speech by a Georgia state legislator, a Democrat who supports Trump, while CNN and MSNBC aired it. Fox also broadcast a conversation in which analyst Brit Hume told fellow Fox personality Tucker Carlson that the convention was trying to feature more women – while at the same moment the other two networks were actually listening to a speech by the Republican National Committee’s chairwoman, Ronna McDaniel.

The dearth of actual coverage on Fox led Trump campaign aide Brad Parscale to complain on Twitter: “Can’t believe I have to watch the convention on CNN. Unbelievable.”

Trump appeared in two White House segments, one with essential workers of the coronavirus epidemic telling their stories and the other with former hostages in foreign countries who had been freed during the Trump administration. All praised the president.

Trump himself complained about spotty coverage of the roll call vote that officially renominated him as the Republican candidate for president. Some networks abandoned the president’s informal acceptance speech in a Charlotte, North Carolina, arena for fact-checking.

Democrats last week turned the traditional roll call vote into a well-received television production, with delegates stationed in their home states or territories to pledge their support for Joe Biden. Republicans had 336 delegates – a fraction of the normal amount – support Trump at the Charlotte Convention Center.

Listening to the president “underscores the challenge for us in the news business”, said CNN’s John King.

“This is a sad thing to say, but a lot of what you have heard from the president of the United States is wrong, misleading or outright lies,” he added.

Some networks dipped in and out of the roll call coverage as they also covered the testimony of Postmaster General Louis DeJoy before the House Oversight Committee. The move led Trump to complain that his moment was overshadowed by the “boring” hearing into whether the postal service was sufficiently prepared for a sharp increase in voting by mail this fall and whether Trump advocate DeJoy has been undermining its operations since he took over.

MSNBC’s Chuck Todd, host of the popular Sunday political show Meet the Press, lit into Trump and the Republicans.

“We were told this convention would be upbeat, optimistic,” Todd said. “Well, what we have just heard from the president was a grievance-filled informal acceptance speech that was filled with so many made-up problems about mail-in voting that if we were to air just the truthful parts, we probably could only air maybe a sentence.”