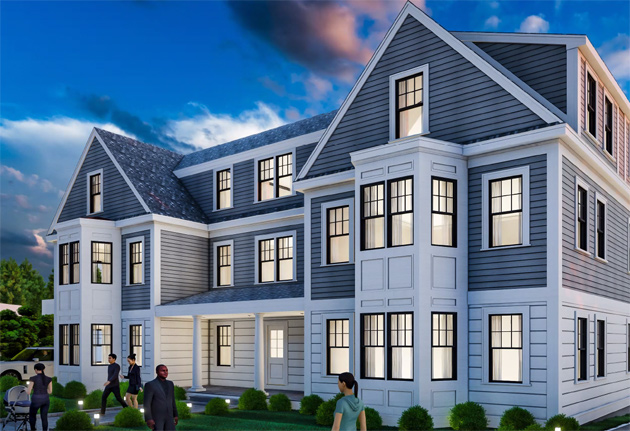 A Roslindale developer is proposing to replace a three-story house turned office building at 4 Anawan Ave., just off Belgrade Avenue with an eight-unit condo building with eight parking spaces.

The West Roxbury Neighborhood Council’s zoning committee voted tonight 4-2 to support Aponte Development’s proposal, which will ultimately need approval from the Zoning Board of Appeal because it is denser than allowed by the lot’s zoning, doesn’t have enough parking under zoning and has three stories rather than the 2 1/2 allowed under the code – although it would be no taller than the building it would replace.

Council members praised the design, in particular that it is not just another big box of the sort going in along Belgrade Avenue but is rather something that actually would fit in with the rest of the neighborhood. The members who voted against, as well as some neighborhood residents, expressed concern about parking – the lot’s zoning calls for 16 spaces for a building that size .

Aponte partner Andreas Hwang said his experience putting up other buildings in Roslindale in recent years is that few people who move into them have two cars. He noted the building would be just a short walk to a Needham Line train station, is around the corner from a bus stop and has easy bike access to Forest Hills.

Council member Mike Hajjar said Hwang could solve both the parking and density issues by reducing the number of units to six. Neighbor Anna Papadopoulos, praised the design but asked why Hwang couldn’t put in more parking in an underground garage.

Hwang said he looked at a garage but said garages are expensive and that one for this project would have made it prohibitively costly. He continued that it’s not like he makes mountains of cash from eight-unit buildings. “We make a living, we do OK,” he said, but “it’s not a huge windfall.”

Nearby resident Evan Judd supported the proposal and said he moved to the area specifically because of the train stop and bus lines, which meant his family of three would only need one car. He predicted people who would buy one of the condos in the new meeting would do so for similar reasons.