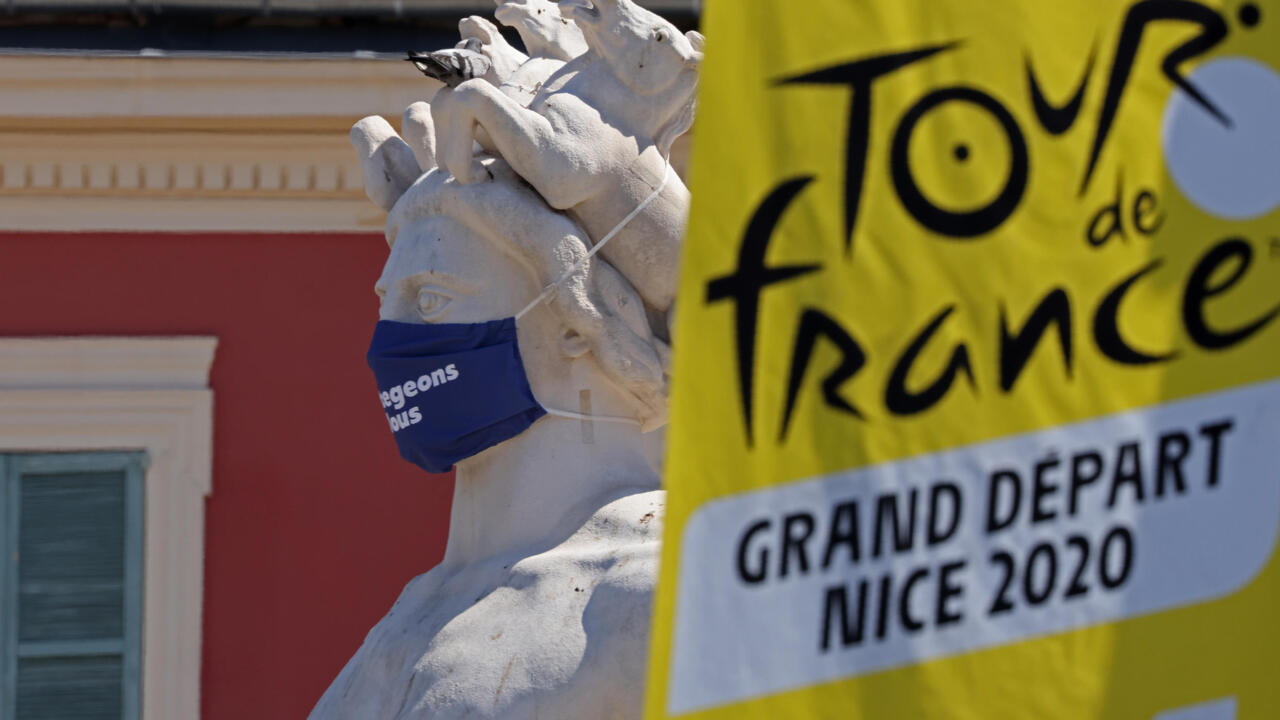 The Tour de France set off from the French Riviera on Saturday, two months later than planned and under the shadow of a coronavirus pandemic which could still shatter hopes of the world’s greatest bike race making it to the Paris finish line in three weeks’ time.

Originally slated for June, stage one of the three-week epic over the peaks and plains of France rolled out of Nice for a 154km loop likely to end in the kind of mass bunch sprint on the iconic Promenade des Anglais which is tailor-made for a global TV audience tuning in from 190 countries.

However, coronavirus still has the race in its grip.

And race director Christian Prudhomme told AFP Saturday that the rule of expelling teams from the Tour with two riders testing positive had been tightened to two positives from the whole entourage, including the likes of mechanics, cooks and drivers along with riders.

In a worrying appetiser, Belgian team Lotto have already sent home four of its staff after one positive test and one “suspicious” result.

Throughout the Tour, a virus testing cell will travel with the teams.

The pandemic means a very different looking Tour this year for riders and fans.

That means a cataclysmic change for organisers, with some climbs in previous years attracting hundreds of thousands of people along the roadsides.

“Yes, the public will have access to the Tour de France,” Prudhomme insisted, explaining that screening areas would be in place to monitor numbers.

Health and safety protocols for riders and teams involve them being kept in a bubble and tested several times, with the smallest possible interaction between respective bubbles.

Dave Brailsford, the head of Team Ineos which has gobbled up seven of the last eight Tour de France titles, admitted there remains uncertainty over the race getting to the Champs-Elysees on September 20.

“If there comes a point when it becomes too much of a risk for riders and teams, to society in general, then people need to take that on board,” he said.

David Lappartient, the president of the International Cycling Union (UCI), warned teams to be vigilant.

“There is no such thing as zero risk,” he said.

“It is not impossible that some teams do not get to the end.

“But with respect for the rules, we should not come to that.”

On Saturday the riders will attempt to think only of the challenge ahead.

Lotto-Soudal’s diminutive Australian sprinter Caleb Ewan, who stands at 5ft 5in (1.65m), is a red hot favourite to win the opener after three stage wins in 2019.

“Stage 1 is not too hard for me, it’ll be cool and maybe rainy, which suits me.”

Sunday’s stage will certainly see the overall leader’s yellow jersey change hands again with a 187km run from the seafront over the top of two mountains summiting at over 1500m.

After the second of those, the Col de Turini, a white-knuckle 30km downhill stretch towards the finish line is not for the faint hearted.

Former French soldier Julian Alaphilippe, who led the race for 14 days in 2019, has vowed to try his luck again.

“It was unforgettable,” he said.

“So if I feel good Sunday I’ll go for it, for the win and the yellow jersey,” he said.

Defending champion Egan Bernal and his key rival, Slovenian former ski jumper Primoz Roglic, may even be tempted to exert themselves early.

“I’ll have to be careful of him,” the 23-year-old Bernal said Friday.

“He was the strongest in the warm-ups,” he said of his 30-year-old rival who has an impressive last 500m acceleration on the climbs.

There will be five summit finishes and 29 classified mountain climbs over the three weeks.

With the two-month delay, the French plains will likely be whipped by autumn winds, especially on runs along the coast such as stage 10 between the Atlantic islands of Oleron and Re.

Suspense will be cranked up throughout, however, as the penultimate day features a potential shake-up with an individual time trial on the fan-favourite Planches des Belles Filles climb.