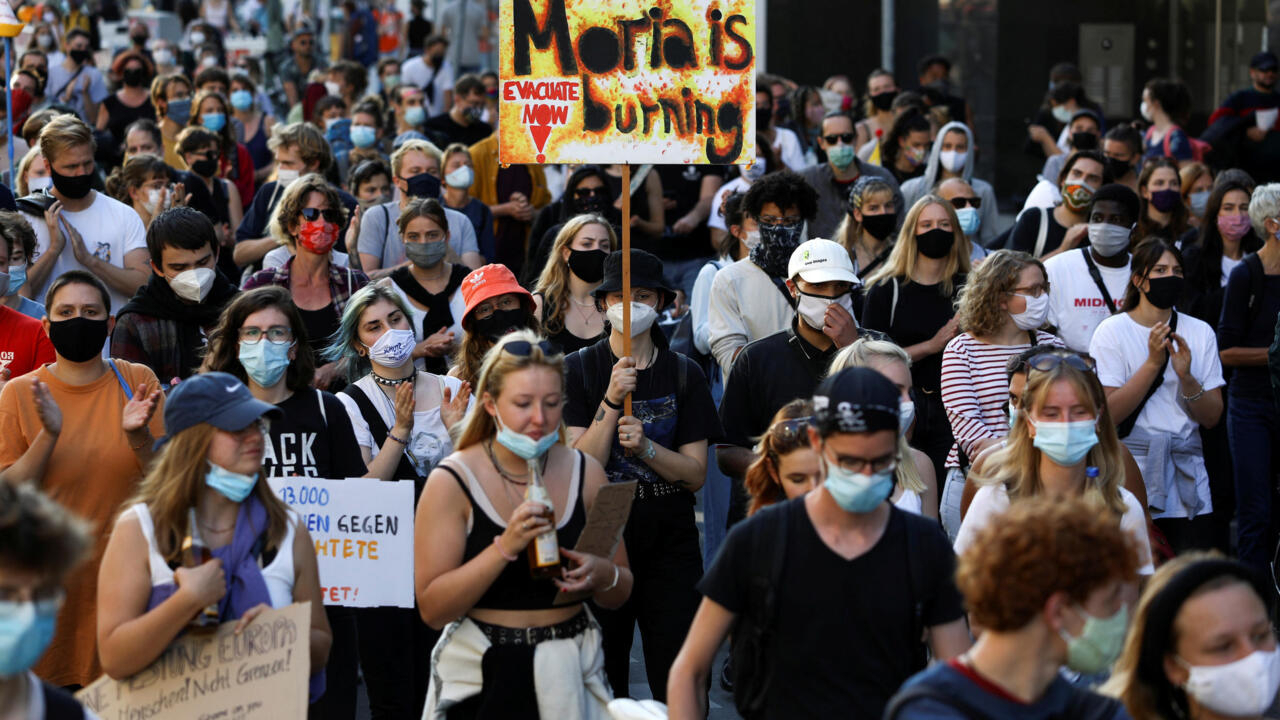 Thousands of people demonstrated Sunday in Berlin and other German cities, urging the European Union to take in migrants left without shelter after a fire destroyed their biggest camp in Greece. The EU is set to unveil proposals this week on how to help the 12,000 people left without shelter.

The mask-clad protesters, in line with coronavirus regulations and armed with “leave no one behind” posters, were joined in the German capital by the aunt of Alan Kurdi, the Syrian boy whose image became a tragic symbol of the 2015 refugee crisis after his body was washed up on a Turkish beach.

“I decided to speak up and speak for those who can’t speak for themselves… If I can’t save my own family, then let’s save the others,” said Tima Kurdi, urging people to write to politicians to push for action. “We can’t close our eyes and turn our backs and walk away from them. People are people, no matter where we come from,” she added.

Germany agreed to take in 1,553 migrants stranded on Greek islands, but Sonya Bobrik of the activst group Seebruecke also stressed that “we have space” to take in more than that. Other protesters held up banners with slogans such as ‘What else has to happen? Evacuate Moria Now!’, ‘Shame on you EU’ and ‘Shelters not Prisons’.

“I find it unacceptable that we live in one of the richest parts of the world and are somehow scared of 15,000 people and there is an eternal discussion about who will help these people,” said demonstrator Oliver Bock.

Police said around 5,000 people turned up at the Berlin rally, while similar gatherings were seen in Cologne, Munich and Leipzig.

Some 12,700 people were left homeless after a ferocious blaze laid waste to their Moria camp on the Greek island of Lesbos on September 9. Since then, roughly 9,000 have been resettled at a new temporary site.

But the destruction of Moria, a notoriously overcrowded and dirty camp, strengthened calls from locals and humanitarian organisations for the migrants to be moved off the island.

Despite deep divisions among members, the European Commission is due this week to put forward new proposals on migration. The bloc has failed to agree a common asylum policy five years after Merkel allowed 1.2 million people seeking protection into Germany.

German Interior Minister Horst Seehofer told Bild am Sonntag weekly that he had high hopes: “I expect the EU Commission to come up with a solid proposal that pulls out all the stops so we have a political agreement on European asylum policy by the end of the year.”

He added that he expected no more than 100,000 migrants to arrive in Germany this year.